Episcopalians at Pride will have a stall in the marketplace as well as joining the march. 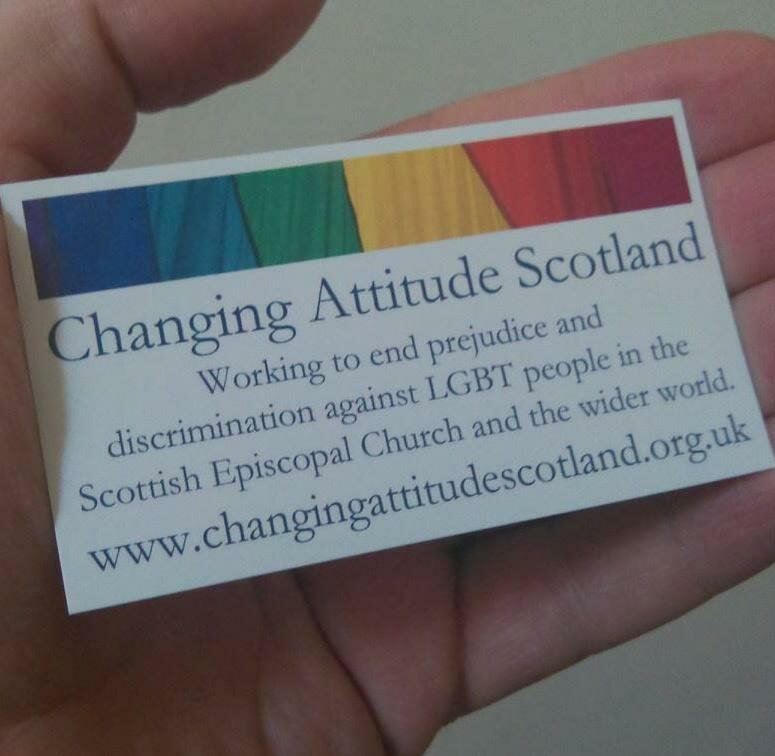 Changing Attitude Scotland rejoices with campaigners in England as legislation which will allow same-sex couples to get married completes its path through the House of Lords. Though the legislation falls a long way short of the core ideal for Equal Marriage which we long for, it is a huge step along the way towards equality.

For now though, we celebrate alongside campaigners in England in full knowledge that marriage is changing and becoming a more whole and wholesome institution in jurisdictions all around the world.

The Rt Rev Marc Andrus the Bishop of California has licensed clergy in that diocese to perform same-sex marriages following the US Supreme Court’s decision to allow such marriages in California to recommence.

In a statement he said:

I celebrate with LGBT sisters and brothers this Pride weekend as their personhood has been more fully recognized by the state, and I give thanks to God for the ways that they not only bless and are blessings to one another, but how they bless the full life of the Church.

Changing Attitude Scotland is pleased to see a number of Scottish Episcopalians in this video produced to support the Equal Marriage campaign. Parts of the video were filmed in one of our Scottish Episcopal cathedrals.

The Archbishop of York has taken a strong and disappointing lead in opposing Equal Marriage legislation in the House of Lords.

Speaking in the debate, he said acknowledged that the Church of England readily blesses inanimate objects but has not yet come to a point where it can bless loving relationships between gay Christians.

What do you do with people in same-sex relationships that are committed, loving and Christian? Would you rather bless a sheep and a tree, and not them? However, that is a big question, to which we are going to come. I am afraid that now is not the moment.

Writing in the Guardian, Andrew Brown has a powerful critique of the influence of Archbishops John Sentamu and Rowan Williams:

…they failed to listen to the weak because they thought the noisy bullies mattered more.

When civil partnerships came in, the two archbishops fought hard, along with the rest of the Church of England, to ensure that they had no religious or spiritual content at all. This was a monumentally stupid position for an established church to take, and the nation duly went ahead and injected its own spiritual contents, leaving the church looking like a whitewashed tomb.

It is reported in the Daily Telegraph that gay candidates being considered for appointment as bishops in England will be subject to prurient questions about their private lives.

Openly gay clerics will be questioned about the intimate detail of their sex life on behalf of the Archbishops of Canterbury or York before they can be considered to be a bishop, the Church of England has disclosed.

Changing Attitude Scotland is pleased that there are no reports of such intrusive and inappropriate questions becoming part of the process for episcopal appointments in Scotland and notes that it is not the policy of the Scottish Episcopal Church to require celibacy for gay people being considered for the diaconate or the priesthood either.

Former Primus, Richard Holloway has said that church leaders who oppose same-sex marriage will eventually be shown to be on the wrong side of history, former Bishop of Edinburgh Richard Holloway.

He said churches had, however slowly, changed their minds on issues such as slavery and the status of women.

He said: “The same will happen in the campaign for gay equality in religious institutions.

“It will be resisted, as the liberation of women was, and is still being, resisted, and many of the same arguments will be marshalled against it, but it will prevail.

“Whatever they say, Christians who oppose gay marriage will, in time, be shown to be on the wrong side of history.”

Bishop Richard was among a group of religious leaders who gave their public backing to opening marriage to same-sex couples.

Changing Attitude Scotland warmly welcomes the consultation document on the Registration of Civil Partnerships and Same Sex Marriage that has been published by the Scottish Government.

The document is available here.

Changing Attitude Scotland believes that same-sex couples who wish to enter into marriage should be able to do so in the churches of the Scottish Episcopal Church and that those who are currently able to officiate at weddings should be able to conduct marriage ceremonies for such couples.

Further resources will be published on this site in relation to this consultation, in due course. The consultation is open until 9 December 2011.

Changing Attitude Scotland is a network of members of the Scottish Episcopal Church and ecumenical friends. Some of us are lesbian, some gay, some straight, some bisexual. We welcome everyone, lay and ordained, whose concern is to work for change in the church’s understanding of human sexuality.