Bishop Gene Robinson has responded to “A Season of Fasting“, the recent reflections of the Presiding Bishop of the US based Episcopal Church in the following way: 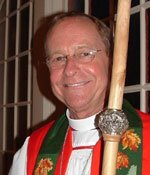 I have the utmost regard and respect for our new Presiding Bishop. Her leadership in these difficult times, not to mention her sheer courage, continues to inspire me. As I vowed at her investiture as Presiding Bishop, I will do everything I can to support her in this ministry.

That includes disagreeing with her views when I think it would build up the Body. What follows are my responses to those portions of her communication to the American Church dealing with the demands/threats made to The Episcopal Church related to those members of Christ’s Body who happen to be gay. Allow me to offer a different reading/critique of our Presiding Bishop’s words, and then propose a different way forward.

“What is being asked of both parties is a season of fasting – from authorizing rites for blessing same-sex unions and consecrating bishops in such unions on the one hand, and from transgressing traditional diocesan boundaries on the other.”

I am reminded of the joke about the chicken and the pig, each asked to contribute to breakfast – the chicken’s eggs require a significantly smaller sacrifice than the pig’s bacon! Let us be clear: what is being asked of both parties is “a season of fasting from” accepting the Church’s gay and lesbian people as full members of the Body of Christ, a season of fasting from “respecting the dignity of every human being.” If The Episcopal Church decides to do that, let’s call it what it is: a sacrifice borne most sacrificially by its gay and lesbian members.

[In citing the early church’s debate over dietary laws] “The needs of the weaker members, and the real possibility that their faith may be injured, are an important consideration in making the dietary decision.”

If there ARE “needs of the weaker members, and the real possibility that their faith may be injured,” they belong to the faithful members of the Church – in The Episcopal Church AND around the Anglican Communion – who are being denied full membership in the Body of Christ because of their same gender love. Is there even a single instance in which Jesus was willing to forego ministry, love and inclusion of the marginalized in order to protect the “sensitivities” of the Pharisees and Sadducees?! What would Jesus’ reaction have been to those same Pharisees and Sadducees if THEY had claimed to be the victims of Jesus’ insensitivity?

“The current controversy brings a desire for justice on the one hand into apparent conflict with a desire for fidelity to a strict understanding of the biblical tradition and to the main stream of the ethical tradition. Either party may be understood to be the meat-eaters, and each is reminded that their single-minded desire may be an idol. Either party might constructively also be understood by the other as the weaker member, whose sensibilities need to be considered and respected.”

There are MORE than TWO parties here. I would maintain that NEITHER the Episcopal Church NOR the vast majority of the Churches represented by the Primates are the “weaker members.” Rather I would say that the “weaker members” are those gay and lesbian members of the Church of Nigeria, whose Church is supporting the criminalization of all association between them in their country. The “weaker members” are the gay and lesbian members of the Episcopal Church, who have to go looking – sometimes in vain – for a congregation who will accept them as full members of the Body of Christ. The stronger/weaker dichotomy is NOT between The Episcopal Church and the rest of the Anglican Communion, but between the Anglican Communion in all its manifestations and the gay and lesbian Christians around the world trying to find a place within it.

For the first time in its history, and at the hands of the larger Communion, The Episcopal Church may be experiencing a little taste of the irrational discrimination and exclusion that is an everyday experience of its gay and lesbian members.

“Each party in this conflict is asked to consider the good faith of the other, to consider that the weakness or sensitivity of the other is of significant import, and therefore to fast, or ‘refrain from eating meat,’ for a season. Each is asked to discipline itself for the sake of the greater whole, and the mission that is only possible when the community maintains its integrity.”
I certainly believe Paul when he says that no part of the Body can say to another, “I don’t need you.” On the other hand, I don’t ever recall Jesus saying that the “greater whole” is the be all and end all.

Doesn’t Jesus challenge the greater whole to sacrifice itself for those on the margins? Preaching good news to the poor, binding up the broken hearted, releasing the prisoners and proclaiming the year of the Lord’s favor involves SACRIFICE on the part of the greater whole. That’s part of what angered his own hometown synagogue when he preached these powerful words from Isaiah. Touching the leper required SACRIFICE of ancient and firmly held beliefs. Eating with sinners was a SACRIFICE of the greater whole’s sensitivities. I would humbly submit that such sacrifice is the only way that our “community maintains its integrity.”

“Justice, (steadfast) love, and mercy always go together in our biblical tradition. None is complete without the others. While those who seek full inclusion for gay and lesbian Christians, and the equal valuing of their gifts for ministry, do so out of an undeniable passion for justice, others seek a fidelity to the tradition that cannot understand or countenance the violation of what that tradition says about sexual ethics. Each is being asked to forbear for a season.”
Where is the “justice, (steadfast) love, and mercy” for the Church’s gay and lesbian people in this threat from the primates? While the vast majority of the Anglican Communion AND the vast majority of Episcopalians may be willing to “forbear for a season,” the world’s gay and lesbian Anglicans long to hear the words spoken to Jesus at his baptism: “You are my beloved. In you I am well pleased.” Who will speak those words to them, while the rest of the Church forbears for a season? How will we explain this “forbearance” to all those gay and lesbian Christians who have come to The Episcopal Church because, for the first time ever, they have believed that there is a place for them AT God’s table, not simply BENEATH it, hoping for fallen scraps? Are THEIR souls not worthy of salvation too? Does anyone relish the notion of trying to explain all this “forbearance” to GOD?

Allow me to offer an additional reading of scriptural references to “fasting.” In addition to St. Paul’s “pastoral” fasting, should we not also consider Isaiah’s notion of “prophetic” fasting?

Look, you fast only to quarrel and to fight
and to strike with a wicked fist.
Such fasting as you do today
will not make your voice heard on high.

Is not this the fast that I choose:
to loose the bonds of injustice,
to undo the thongs of the yoke,
to let the oppressed go free,
and to break every yoke?

Is it not to share your bread with the hungry,
and bring the homeless poor into your house;
when you see the naked, to cover them,
and not to hide yourself from your own kin?
(Isaiah 58: 4, 6-7, NRSV)

Fasting that focuses only on the self is not, in Isaiah’s mind, the most pleasing to God. For the past many months, the Episcopal Church and the Anglican Communion has spent far too much time and money and focus on this debate. I believe that the majority of us – certainly in The Episcopal Church, and possibly in the Anglican Communion as well – want to set this aside and get on with the work of the Gospel. What would it be like if we fasted in the way that God, through Isaiah, suggests: to fast from our internal squabbling for a season, and turn our focus to the world’s homeless, hungry and poor, in this and every land? What if we focused on what we say is our top priority – ministry to a world in pain through the achievement of the Millennium Development Goals – and simply fasted from this self-focus?

The changes in our polity proposed by the Primates can only properly and canonically be responded to by the laity, clergy and bishops gathered in General Convention in 2009. The Primates’ demands can be seriously, prayerfully and thoughtfully considered at that time. What if we stated, simply and calmly, that the Primates’ September deadline is impossible under our polity, and pledge ourselves to feeding, housing, and clothing the poor and binding up the physical and spiritual wounds of the world’s neediest for this season, until 2009? What if we gave up our internal squabbling for a season, took no precipitous action, and turned our focus to the world that Jesus Christ gave his life for?

This way forward may not be acceptable to many in the Communion who want this settled now, once and for all. So be it. Nothing we do will settle this once and for all. Does anyone believe that our full compliance with the Primates’ demands, our complete denunciation of our gay and lesbian members, or my removal as bishop would make all this go away?! We cannot determine what the response to our actions will be. We can only decide what our faithful response will be to the demands made of us.

If the response of the Archbishop of Canterbury to our prophetic fasting should result in our not being invited to the Lambeth Conference, then let us offer that denial as part of our fasting. Let us dedicate the diocesan and personal resources that would have been spent on Lambeth to projects involved in furthering the Millennium Development Goals.

During the debate over the consent to my election, I am told that the Bishop of Wyoming noted that not since the civil rights movement of the 60’s had he seen the Church risk its life for something. Indeed, I think he is right. This is such a time. A brief quotation hangs on the wall of my office: “Courage is fear that has said its prayers.” Now is the time for courage, not fear.

I pray that in the days ahead, as the Executive Council meets in Portland, the House of Bishops meets in Texas, and the General Convention (the ONLY body which has the authority to respond to the demanded changes in our polity) meets in 2009, that we contemplate our call to “proclaim the year of the Lord’s favor” to those who have been denied it for so long and commit ourselves to the kind of fast that is pleasing to the Lord

No Responses to “Response of +Gene Robinson”